Remember the joy when you received your 1st set of keys to the house as you turn of age? Or the excitement on the vast possibilities and future jubilation when you turn the keys to your new home? Or sweet nostalgia as you handled the keys to a very special box where memories and precious things are kept? Keys mean so much…a place of security, a home you call your own, or something you want to keep secret and only you would know and understand what the contents mean to you.

These skeleton key necklaces are a continuation of my obsession with them – their simple beauty, or for some, their extremely intricate details. Popular in the late 1800s, these keys conjure images of vintage furniture, classical homes, Gothic churches and antiqued chests. The possibilities of imagination are endless when the old (the key necklaces) and the new (your outfit) co-exist in fashion and style.

If you love key necklaces, check out : {keys of inspiration ~ part II } 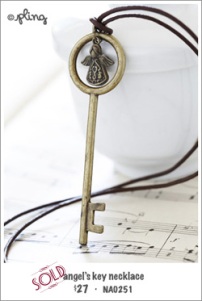 These modern keys are given a twist from the past. Engraved with “Life”, “Dreams”, “Love” or “Secret”, they tell stories of secret yearnings, quiet admiration, or fantasies of another world. Like opening up doors that are closed, keys have always symbolized, at least for me, fresh opportunities and chances that are blessings from above and where beyond those doors, lies treasures that are most dear to heart – family, friendship and love.

If you love these key necklaces, check out { keys of inspiration ~ Part I } 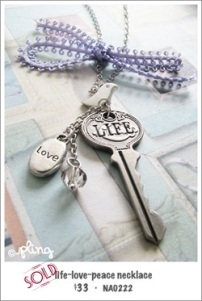 Inspired by the ribbons and bows that were in my dresses when I was a little girl, and paying tribute to my late daddy who used to tie my hair for me (yes, it was my daddy who loved to braid my hair for school), these pieces bring me back to my childhood days of so much fun and reverie.

And carousels…who doesn’t love them? Boys and girls alike, we all like these merry-go-rounds. And living in apartments with playgrounds, we kids couldn’t wait to head downstairs for some crazy climbing, digging and chasing around those modest carousels. They still hold a special place in my heart and I rejoice whenever I catch a glimpse of them in old estates. Not those modern synthetics one. They don’t make them like that anymore. The ones that we occasionally see at those big fairs and in overseas countries just ooze with romantic connotations – bright, glittering, and fairytale like.

New products! I love to wear flats and those ballet flats from Cotton On are my casual shoes. Sometimes, I just feel like dressing them up and thus, this idea! Even though I categorize them as shoe clips, they can be used as a brooch, a hair clip, or a multi-clip to adorn a plain top. Add some razzle-dazzle and something ordinary is transformed instantly! Let me know how you would like to use them and I’ll customize accordingly. Limited pieces and I sell them in pairs. Shoes not included, of course. 🙂

Castles always held an attraction for me. Those locked doors, hidden corridors that magically led from 1 room to another. Chambers that throbbed with stories of their own. I’ve always wanted to visit a castle to explore its narrow stairwells and broad courtyards, listening to whispers of its past life.

I was looking forward to Castle Sant’Angelo, which is right outside the Vatican City, across the Tiber from Rome. Sadly, the doors were closed on that fateful day when I arrived due to an annual meeting. Yes, castles have annual meetings. And yes, this is the one featured in the movie, ‘Angels & Demons’ (which all the more spurred this entry after watching the movie over the weekend).

All I managed to snap pictures of, was the beautiful bridge that leads to this medieval castle and fortress. The other picture has one of my favorite stone angels in the foreground (there were many lining the whole stretch of the bridge! So I had to choose one.). Sharing these inspirations… 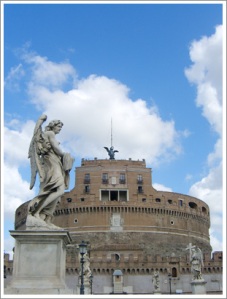 To unlock those heavy doors are similarly ornate keys. These key necklaces mimic those from the medieval times, when ironwork was intricate and blacksmiths worked hard with their tools and wrought iron to cast castles with that flavor so rarely seen in present times. And of course, who can forget crowns right? 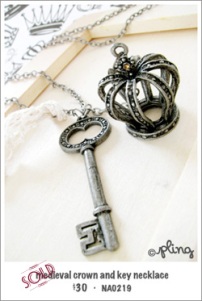 Antiqued keys conjure romantic notions of a time past, of a place where treasures were safely locked from plain view in immovable chests or dainty jewel boxes. They never fail to inspire me to dream of the place where it might have been, transporting me to a period that I always find in the classics.

Imagining drawers that have yet been discovered, old chests that were not opened for ages, antiqued keys are like guardians to these memories or secrets. Safely tucked away, these containers lie in wait for the holder of the key to reveal their treasures within, treasures that were held so dear to the heart.

Stamped with singular words of “Journey”, “Heart” or “Memory” (short, concise and poignant), these keys of inspirations hope to interpret your feelings of the moment, the life at present or a past experience much cherished. 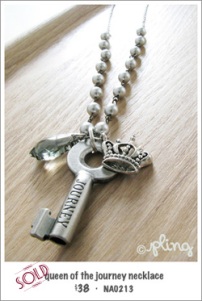 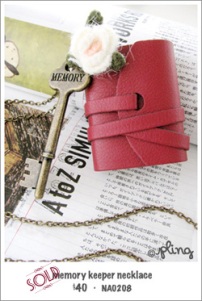 This title bears a tad resemblance to “Earth, Wind & Fire” right? Ok, a tiny tad. More aptly, it’s this week’s upload on flower-themed creations with this month’s dedication to Eco-Chic.

Today is Earth Day! And what a beautiful reminder to do good to the place we share. To continue the thread on sharing, here’s a simple picture I took of a dainty little yellow flower by the roadside. I’m just hoping that wildflowers will not disappear or that flowers have shorter blooming cycles since winters are longer and spring is late to come. Don’t you think such simple, spontaneous beauty is inspiring and it would be truly disastrous to not find them anymore on the streets, growing by the corners, waiting to be discovered and admired?

Green Tip: I save water (and money!) at home using the water leftover from rice to water my flowers and plants every day. It’s really good for them as the water contains the “polished-off” nutrients from the rice and thus a natural fertilizer! Totally organic! You can also use used grounded coffee or tea leaves after your daily cuppa. And those who come to my little apartment thought, “Green fingers”. But the secret is out!

For today (April 22), don’t drive. Take public transport. Or do something “green” that you don’t usually do. Join the eco-movement! I’m sure, like me, you would like to admire these floral blessings. pling‘s little dedication…hope you like them! 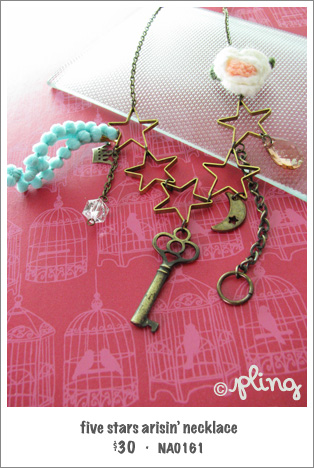 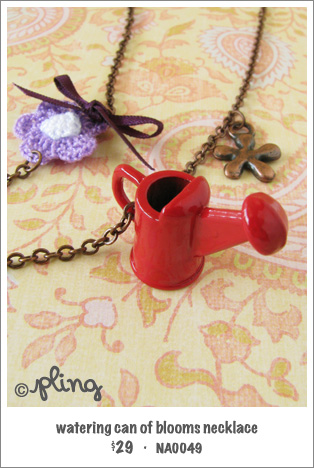 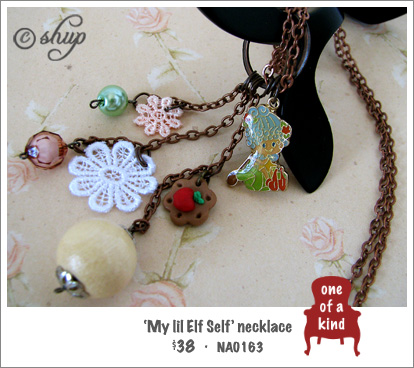 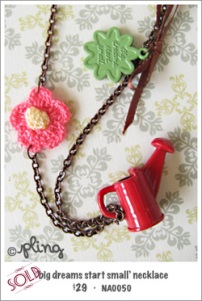 A splash of vintage gold goes a long way this season, what with yellow, petrol blue & neon being the must-have hues this year. With these statement pieces in retro gold, you can inject a dose of the seventies hell-may-care glamor or take a romantic literal lead into the imagery depicted on the necklace.

And because these necklaces are what every cool girl has (at least one!), I’m bringing them back as must-have extras for dressing up your plains, jeans or simply adding an attitude to your color combination. To avoid: dangling earrings when donning these necklaces. (They are eye-catching enough!) Simple studs will do. Now, isn’t that easy? It’s wear and go! 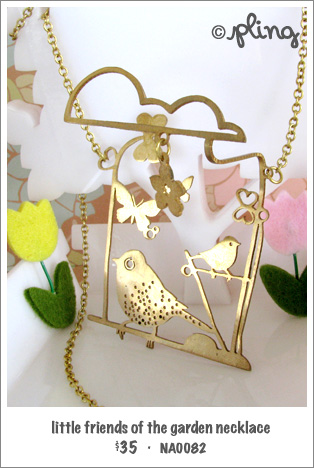 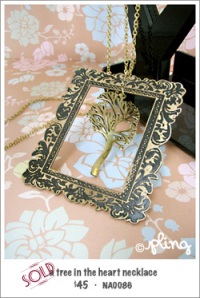 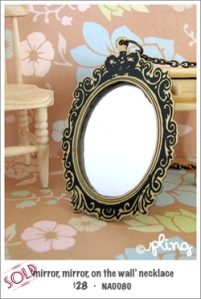 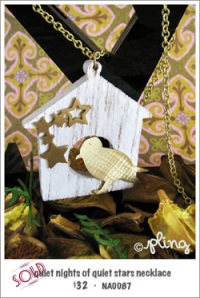 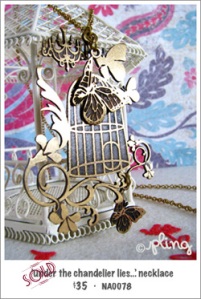